Earlier this year Member Services adviser Cheryl Lee joined Society buyer Joanna Locke MW on a trip to the Loire to get an early taste of the 2015 Muscadet vintage.

The early reports had been so promising that I couldn’t wait to taste the new 2015 Loire vintage, so I was very excited to be invited to join our buyer as she visited growers in Muscadet to taste the wines, and then travel on to our old favourites, Gratien & Meyer, to oversee the blending process of our Society Celebration Crémant de Loire.

Our first day was spent in Muscadet country in the western Loire. Where better to start than with our long-term supplier Chéreau-Carré, source of The Society’s Muscadet Sèvre-et-Maine sur Liefor more than 25 years.

On arrival father and daughter Bernard and Louise Chéreau took us on a tour of their Château de Chasseloir property. Although we were having regular spells of rain, we managed a quick tour of the vineyard to take a closer look at the vines. 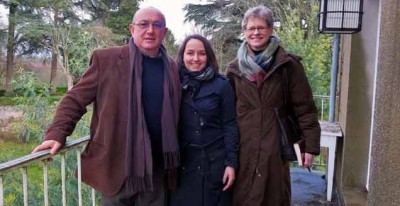 Bernard explained that the vines at this property average approximately 50 years old, and all produce melon de bourgogne grapes (also known as muscadet), the permitted grape variety of the appellation. The grapes are harvested by hand to avoid damage. These older vines may produce lower yields, but they provide a more concentrated flavour to the wines and that really showed through when we tasted the wines later.

Back at the winery, we were invited into their barrel cellar. Here Bernard showed us an example of a see-through ‘sur lie’ barrel. With a light shining behind the barrel we were able to see the lees (a sediment of dead yeast cells and other leftover particles from fermentation) sitting at the bottom of the barrel. Wine students are well acquainted with the process but it was great to see it in action. 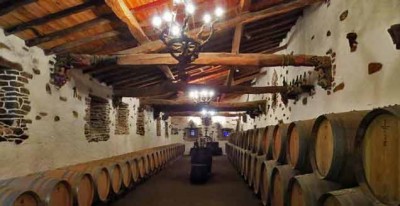 he barrel cellar at Chéreau Carré

The term sur lie means ‘on the lees’ and refers to the wine resting in the barrel/tank for a period of time on its lees after fermentation has finished. The process adds depth and complexity as the lees contact imparts creamy and yeasty characteristics to the wine. Allowing this extra contact with the lees also means that more carbon dioxide is absorbed into the wine giving the finished wine that refreshing spritz.

If you see ‘sur lie’ on a label it is often an indicator of a better-quality Muscadet wine. Bernard told us this term can only be used on a label if the wine has been aged on lees between six and 12 months. This means that wines that have been aged for longer than a year are not recognised on the label for being aged on lees at all. An example of this is Chéreau-Carré’s Muscadet Sèvre-et-Maine, Le Clos du Château L’Oiselinière. Contrary to my previous belief that Muscadet is a wine to be enjoyed young and fresh, this is a wonderful example of the melon de bourgogne grape in a very different style to the young, fruity version for which it is usually known. Having had a longer ageing period on its lees and in bottle, this wine is richer and more complex in style and will continue to improve. 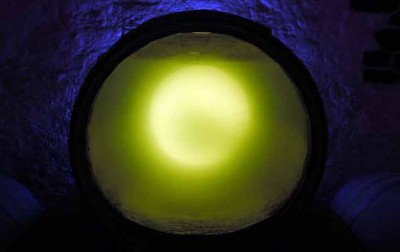 Muscadet sur lie in the barrel

Bernard and Louise showed us some of their wines from older vintages and expressed their hopes for Muscadet to be seen in a different light and for it to be recognised for its potential as a fine wine.

During the tasting we were shown different samples of Muscadet from both the 2014 and 2015 vintages. The 2015 tank samples were lovely and fresh with good balance of fruit and acidity. Most were approachable and ready to drink. The 2014s showed again a healthy balance of fruit and acidity but with riper flavours. Bernard said that 2014 was almost a perfect vintage and certainly the best vintage since 2010. 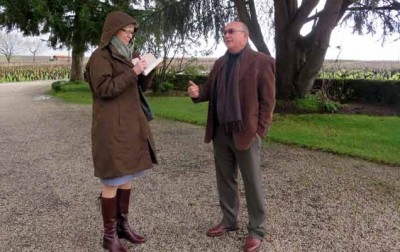 Before we left we were treated to the classic pairing of oysters and Muscadet over lunch. This was my first experience of this famous food and wine combo and it did not disappoint. There is certainly something unique about that combination of the salty, freshness of the oysters, together with a bone-dry wine of such refreshing acidity and minerality. It was an unbeatable delight for the palate and a lovely end to our visit.